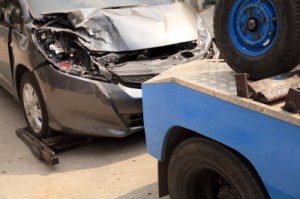 Very sad news out of Pitt County this week. A father and son traveling in a Honda Civic were attempting to turn left into the Walmart Express parking lot off Highway 102 West when their vehicle was rear-ended by a Ford Expedition, reportedly also carrying a father and son, at approximately 55 MPH. Justin Mozingo was driving the Civic with his father, Kenneth Earl Mozingo, riding as his passenger. Unfortunately, Kenneth Mozingo was killed in the accident. Justin Mozingo was also injured, but it reportedly recovering and in good condition. The driver of the Ford SUV, Omar Ridhi El-Shaer, has been charged with misdemeanor death by motor vehicle, careless and reckless driving and failure to reduce speed.

While rear-end accidents are extremely common – over 2.5 million are reported every year – fatalities in rear-end accidents are somewhat rare. The most likely injury to result from a rear-end accident is a whiplash injury or other back or neck injuries from the quick jerking moving of the spinal cord on impact. Where fatalities are more common is when a vehicle strikes a motorcycle from the rear, or where a large commercial vehicle strikes a smaller passenger car. It is likely that in the Mozingo crash in Ayden, the size of the large Ford striking the much smaller Civic caused a significant enough impact to fatally wound Mr. Mozingo. Pictures of the vehicles show severe damage to the rear of the Civic, with much more minor damage to the front of the Ford Expedition. In addition to the difference in size of the vehicles, the driver of the Expedition was traveling very fast at 55 MPH and the civic was either stopped or moving very slowly resulting in a very hard impact.

Determining liability in rear-end accidents is generally fairly simple. In North Carolina, there is a presumption that the vehicle who strikes another in the back is at fault. We have certainly seen talented defense lawyers attempt to blame the vehicle in the front by arguing that the stop was sudden, unnecessary, or unexpected, but these claims generally are not successful except for in extreme cases. Further, if a rear-end accident occurs after dark, it is important to explore whether the vehicle in the back could see the vehicle it struck from behind. Did the front vehicle that was struck have proper tail lights and brake lights? Was it signaling a turn as required by law? If the vehicle in the front had proper lighting, and was appropriately stopped to make a turn, the presumption of fault on the rear car is nearly impossible to overcome.

Because wrongful death cases are governed by special laws, it is extremely important when pursuing a wrongful death claim to hire counsel who has handled many of these cases and understands the special rules that apply. Our office has helped many families who have lost loved ones in a car accidents or in other types of accidents and is always available to give legal advice to those families who find themselves in this very sad and unfortunate position. We handle these claims with the care and compassion we would want someone to extend to our our family and with the legal experience and expertise to get the job done.